So I’m going to weigh in today on one of the Netflix hits of the summer, which I watched in the (sigh) waning days of it. It’s Stranger Things.

Now, readers, I’m no particular fan of either science fiction or horror, the two main genres. But I also respect the abilities of both genres to be wonderfully, well, deep about what they are saying as they deliver time travel and monsters on the unbelievable side. By way of defining my fandom or lack thereof: I don’t relish Stephen King books, exactly, but I’ve read It. It is a profound look at the problem of human evil dished up with a narrative about scary and otherworldly clowns. It’s about the problem of human evil. The clown often appears — and is seemingly activated by — human evil: family abuse, racially motivated murder, and the like.

So, one of the things I liked about Stranger Things was its grounding of sci-fi/horror mysteries in a quotidian suburban world that in many ways is represented as the opposite of human evil. It’s a type of paradise. The birds chirping on the soundtrack are full of prelapsarian promise. it’s a world of calm and beauty, good friendships (among the four middle school boys), attentive and kindly teachers, and concerned parents. It’s also menaced with evil (a sinister government lab and eventually, an actual monster). Then there are the in-between characters who either let evil in or don’t fight it: family dysfunction (broken families; inattentive fathers, especially; drunk sheriff). It’s a war between good and evil. Sheriffs who can come back from the bottle and handle the weirdness choose the right side.

In that, it is (as many commentators have noted, see here and here) an homage to films like E.T. the Extra-Terrestrial, the novels of Stephen King, and the films that were made from them in the 1980s. E.T. was also a movie that represented suburban life as a type of paradise, even given parents who were either absent or without a clue to the goings-on.

So, when the character Eleven came on in Stranger Things, the first thing I thought was “she’s the E.T. of the movie.” 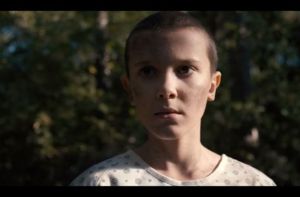 Eleven is a girl who arrives seemingly out of nowhere. She has a shaved head (visually close to bald) and huge eyes. Those are the initial “visually reminiscent of E.T.” clues. (She’s named Eleven because of a mysterious tattoo on her arm.)

So it is that I take issue with an interesting paean to Stranger Things, published by Ashley Reed in Avidly . Reed posits that Stranger Things is about a feminist re-envisioning of the 1980s films like E.T. to better represent girls’ inner lives and “to create female characters who are not just props in boys’ stories.”

I think in many ways Stranger Things is a retelling that doesn’t particularly recuperate the women’s stories in a more feminist direction. 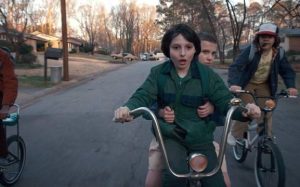 One of the reasons is that Eleven’s story may be one of an unusual girl, but her affinities with E.T. (the character) are multiple. They frame her more as an interesting alien than as an independent girl. It’s not exactly a big step up for portrayals of women that Eleven is (metaphorically) an alien. 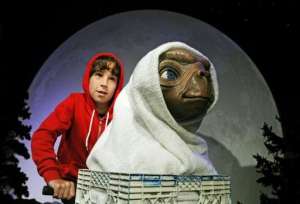 Like E.T., Eleven finds a home in the room of one of the boys on bikes. Like E.T., she conceals her distinctive head in a covering (towel for him; blond wig for her). Like E.T., she is a passenger on those bicycles, rather than an independent rider.

If she were an independent rider on those bikes, then we’d be talkin’ new roles for girls.

More strikingly, Eleven is the E.T. in Stranger Things because she has a pressing need to get “home.” In what the audience sees, she has been removed from an (unseen) mother to live in the sinister government lab. She has been used as something of a lab experiment on telekinesis in the sinister government lab. There is an appropriately sinister father figure, the lab director. It is implied that her mother was part of similar experiments. Further, the lab director might be her actual father.

Next: more on Stranger Things.