Yesterday, I discussed why audiences accepted the blend of fantasy and reality in Sesame Street from the beginning, despite 1960s psychologists warning its creator, Joan Ganz Cooney, that children would be harmed by blending fantasy and reality. (For a look at the Pioneers of Thirteen documentary in which she says this, see http://www.thirteen.org/programs/pioneers-of-thirteen/#the-60s-experimental-days.)

Their belief is puzzling, since many children’s narratives blend fantasy and reality—presumably, the experts were concerned with television and its verisimilitude in representing reality; to contain fantasy characters as part of the brownstone, street world of early Sesame Street would be to blend genre boundaries in an unsettling way.  Yet certainly 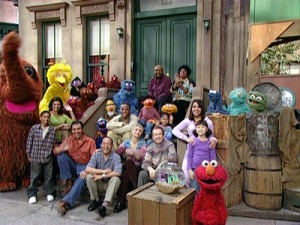 one of the charms of Sesame Street is the blend of fantasy and reality: Kermit and friends aren’t real, but their charm suspends belief easily, for children and adults alike. All the Muppets interact with children and adults easily. They’re, hey, part of the neighborhood.

In cogitating on this, though, I have to admit that the experts are right to some extent. Isn’t the pairing of fantasy and reality characters kind of a clunker in some notable media forays? The cartoon Jessica Rabbit talking to the real actor Bob Hoskins in the film Who Killed Roger Rabbit? seems more a director’s whimsy than a vital part of the film. The comedy stemmed from the audience’s familiarity with genre conventions: Cartoons over here (usually); live actors over there. Genre rules were being bent and broken, by people who were hyperaware of them—that was what we were asked to applaud.

But watching the Muppets, we never feel that we are being asked to respond primarily to the fact that Kermit talking to people bends some boundaries–that he and his ilk ought to exist only in the studio talking to other puppets.

Why didn’t they look arch? And why were kids (and parents, and nearly every form of media from mainstream through alternative) charmed by them?

I think because their placement in the evolving medium of television mirrored the placement of their audience—kids getting their arms around the mysteries of the adult world. The Muppets in the world—whether the stoop or the garbage can—seemed gleeful and surprised at their actions. Like they were surprised that they could do the actions, but doing them all the same. Just like kids moving into the world: gleeful and surprised that they can, from a 2-year-old realizing that they can locomote down a strip of carpet to a 5-year-old realizing that, well, that word with the one s and the two ee’s after it is pronounced “see.”

Indeed, the Children’s Television Workshop, the organization behind Sesame Street, published Sesame Street Unpaved: Scripts, Stories, Secrets, and Songs (written by David Borgenicht), in which the psychological age of some of the Muppets is discussed, and they are children. (Big Bird, for example, is six.) But even without that background knowledge, the Muppets read easily as stand-ins for children in their glee and curiosity.

So Cooney and company—maybe knowingly, maybe inadvertently—fused the media and the message. It seems like a children’s genre whose conventions in previous generations might have held the Muppets bound in a studio had developed technology that actually did change the conventions of the genre. The rise of the hand-held camera? The contemporary fascination with cinéma vérité? The technology of the Muppets, driven by Jim Henson’s syncretism in creating puppets who seemed to stand-alone? The rise of child-centered parenting? What is clear is that those conventions actually did bend, or expand enough, that, for first time, puppets were paired with the cityscape and the backyard. For a child audience that had been cocooned in relatively small spaces—the bedroom, the living room—and was, well, starting to look at a bigger world, the Muppets represented them, and the glee and joy to be found in that larger world. Why was Sesame Street a runaway success? And why is it now an institution? A lot of the answer is in the fusion of the development of a medium and its audience.

Hi, readers, and welcome to April!

Today, I want to get my meta on by examining television as a text. Plus, this post will be examining one of the elements dear to the heart of PhDs in English:  genre and its uses. The text for today’s post is the Muppets; the genre is children’s television, those with puppets specifically.

Viewers within a 60-mile or-so radius of New York City were treated last year to a documentary on the first half-century of their local public television station, called Pioneers of Thirteen. It contained a lot of great footage from NYC’s WNET (known colloquially as Channel 13). The first hour and a half is a kind of magical mystery tour, from the austere, black and white filmed master class with cellist Pablo 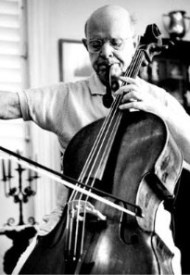 Casals (the kind of high culture for the masses that typified early 1960s public television), to  the pop, colorful world of the later 1960s, in which Big Bird and Cookie Monster reign supreme. (The one on the 1960s can be seen here, and as you gaze upon the picture, remember that Big Bird started life in an advanced stage of molt.) 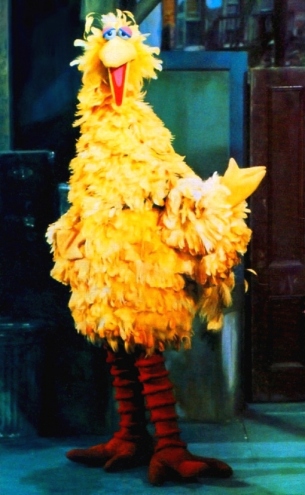 Channel 13 takes justifiable pride in its gestation of Sesame Street. The award-winning program is certainly a signal achievement of public television by anyone’s yardstick. It’s interesting, though, to see how contested the development actually was.

Children’s Television Workshop founder Joan Ganz Cooney tells a great story about an initial dinner party in which an (unconvinced) Carnegie Foundation executive asked if children could really learn from the relatively new medium of television—at the time, so affiliated with mind rot and wasteland metaphors that the emphasis seems to have been keeping the tykes away from it entirely. Cooney felt they could certainly learn to sing along with advertising jingles. So why not replace ad puffery, her thinking went, with abc’s?

The documentary skips what was apparently at least a year-long research assignment finding out pedagogical opinion on how, indeed, children can learn from television. But Joan Ganz Cooney scoffs at one key finding: don’t, the experts said, mix fantasy and reality. It will confuse children, and it will never work.

Whoa! That observation sent me to write this blog post. I was initially puzzled, because humans and puppets had certainly been paired before. Shari Lewis and her puppets were one of the most popular children’s programs on 1960s television. (For an example, see below.)

In Shari Lewis’s television programs, though, she functions as a type of “mom” figure—overseeing the action of a child-like Lamb Chop (the little girl) and Charlie Horse (the little boy). The puppetry was clearly orchestrated by her, just as the actions of small children are often orchestrated by their parents. (And even if you were a small child and unaware of Lewis as puppet master, she clearly oversaw the proceedings, just like a mom.) In that way, fantasy and reality are clearly demarcated. There is a real person, telling a story with cloth and movement.

The Muppets, by contrast, seem to be in charge of themselves. They are fantasy, telling a story by themselves (often) and interacting with people (reality) not as appendages, but as stand-alone characters. From the beginning, we see Kermit as a reasonably debonair sports announcer. He is by himself, and not only conducting the action but commenting on it. The Muppets are alone or only with other puppets (sometimes), in charge of themselves (seemingly), and on the street, often conversing with people who are kindly, but who do not control them. This seems to be the direct result of Cooney defying the dicta of experts, by commanding her troops to “get Muppets on the street!”

In the next post, I’ll explore my second fascination: why audiences accepted the fantasy of stand-alone puppets (fantasy) talking to people (reality).