Several weeks ago, I wrote a couple of posts on the history of vegetarian cooking in the U.S. over the past several decades. My posts were mostly centered around the idea that vegetarian cooking out of the 1970s (The Moosewood Cookbook) was not archaic and old-fashioned (as a magazine article I cited had it), but in fact were the progenitors of the revolution that put vegetables at the center of a meal (on one end of the spectrum) and resulted in more emphasis on vegetables than had ever been seen before in U.S. cooking (on the other end).

Then, I had a very wild couple of weeks and had to set the posts aside for a while.

But now I’m back, and I want to wrap up those posts by talking about what I think the attempt to date the vegetable food revolution to the restaurant Greens rather than Moosewood means for this cultural moment.

I kind of alluded to it in my second post. Greens is a very upscale restaurant, and to date the revolution there subtly shifts the general “more vegetables, more often, and more creatively done” movement of the past several decades to groups that are economically upscale rather than the population at large.

It shifts ownership and provenance, as it were, to the wealthy from the funky and the creative. In that, it tracks very closely to other phenomena of the past several decades that have increasingly resulted in a wider and wider split between rich and poor, or even very rich and very medium. And that’s too bad.

Yes, I know all the objections that can be raised to this view. I could itemize them myself. First, Greens is affordable for the middle class and I’ve characterized it as a home of the rich. Second—and broader—the American Food Revolution Vegetable Style was always pretty much about the upscale. At the very least, this argument might run, it came out of the educated classes as exemplified in the Moosewood Café of Ithaca, NY, home to a major university (Cornell). As such, it was arguably populated by the upwardly mobile and striving.

I still think there is a world of difference. Yes, any middle class person can spring for a meal at Greens. And yes, Moosewood and its ilk were pretty much all aimed toward the educated classes. But Moosewood and its kind were accessible, and they were importantly accessible. The cooking they espoused was creative, cheap, and theoretically open to anyone wanting to learn it. As a movement, it employed creators, learners and beginners. Greens as paradigm, in contrast, is about chefs and foodies already established as leaders and their further mega-establishment in expensive real estate. Accessibility as a foundational tenet it has not.

this time, and dedicated to a more sophisticated palate. Chez Panisse was, initially, also a place for creators and beginners, and struck something of a new way in American cookery at the time. But again, it was not the vegetable revolution that The Moosewood Cookbook was; it simply upped the sophistication of the food. In this, it is arguably more akin to Julia Child’s work in making French cooking more accessible to middle- and upper-class Americans than to either Moosewood or Greens.

If I were writing a history of U.S. cookery since the 1960s, arguably all three of these restaurants, and Julia as a celebrated cook, worked to make different forms of cooking available to Americans. But Greens and Chez Panisse are at home in upscale real estate, and Julia Child arguably made French cooking more accessible than it had been, but never fully part of the average American home. It seems to me that only Moosewood and its kind offered an accessible and flexible form of cooking that was notably democratic. And I salute it for that. And for the vegetables.

This is a continuation of my post from a couple weeks ago, on an essay about the growing popularity of vegetarianism—and, more to the point, about how we date the revolution in American cooking that made vegetables a centerpiece.

Last time, I cited a review essay in the New Yorker that characterized The Moosewood Cookbook as the result of “preachy vegetarian communes and collectives…[that] began to proliferate [in the 1970s]….remember the breads and carrot cakes that weighted almost as much as the people eating them?” I focus on this particular set of phrases because they represent a mechanism that particularly fascinates me in life—the overwriting of existing cultural moments, events, or communities into invisibility—and how that takes place.

It quite often takes place through describing or discussing said cultural moments, events, or communities as if they have in fact disappeared, or become archaic and/or just plain wrong. Two examples. In Norman Klein’s The History of Forgetting: Los Angeles and the Erasure of Memory, he discusses the removal of ethnic neighborhoods in Los Angeles and their replacement by ambitious but not always realized urban renewal plans (such as freeways), noting that citizens just a few years after the tearing down of the older neighborhoods don’t seem to realize that they were ever there. He says of this phenomenon: “the overall effect resembles what psychologists call ‘distraction,’ where one false memory allows another memory to be removed in plain view, without complaint—forgotten.” Another set of descriptions can be found in Joanne Pope Melish’s Disowning Slavery: Gradual Emancipation and ‘Race’ in New England, 1780-1860, which focuses on the cultural attempts to make New England seem solely white in ethnicity despite the existence of a black population. These attempts were largely successful in the popular imagination until fairly recently.

It may seem a far stretch to analogize the ways in which communities are rendered invisible and forgotten with the way that cookbooks are dissed and removed from revolutions they helped create. But look at how much the methods resemble each other. Characterizing The Moosewood Cookbook and related phenomena as “preachy” and associating them with “heavy” (a dread word in contemporary cookery, as modern-day cooking wins praise by being “light” or “bright”)—and, more tellingly using “remember” as the lead in—makes those things seem a) wrong and b) dated. The latter especially makes it seem as if these phenomena have simply disappeared in the mists of history. A textbook method of cultural overwriting into invisibility.

This is particularly interesting because in fact most of these cultural plot coordinates are still going strong. Moosewood, for example, is still a restaurant, still open, and still a collective. Mollie Katzen, who wrote and illustrated the original Moosewood Cookbook, is still publishing cookbooks (including an update of the original), and is a major food consultant to the Harvard School of Public Health. She has been inducted into the James Beard cookbook Hall of Fame and named one of “Five Women Who Changed the Way We Eat” by Health magazine.

So does this attempt at overwriting contain a cultural meaning? Coming in a future post.

Several months ago, the New Yorker published a long essay about vegetarian and vegan cookery. In the process, it critiqued a number of cookbooks of the vegetable stripe—recent titles like Plenty, Vegetable Literacy, and Veg.

In the process, though, it gives a long history of vegetarian cooking, touching on ancient religious prohibitions against eating meat and the English nineteenth century, when a minister’s wife apparently wrote the first vegetarian cookbook. What I want to talk about, though, is a remark made about The Moosewood Cookbook, which the writer characterizes part of a moment where “preachy vegetarian communes and collectives…began to proliferate….remember the breads and carrot cakes that weighted almost as much as the people eating them?”

In this post, I intend to rise to The Moosewood Cookbook’s defense, but also to do a little historical correction and think a bit about the cycles of revolution and how they are overwritten.

More importantly, perhaps—and the point completely missed by the New Yorker–it was one of the first American cookbooks to say that vegetables could be it: could be the main part of your meal. Essentially, they moved vegetables from an afterthought on the margins of a plate to a possible (and desirable) centerpiece. It was a decisive break from the cooking of the 1950s (think Betty Crocker, and even Joy of Cooking). And not only in its emphasis on vegetables: it was far more international (baba ganoush rather than meat and potatoes), and it encouraged handmade rather than technological production. (Betty Crocker is a fictional character designed to give a human face to the laboratories of General Mills.) Betty Crocker cookbooks look like a slickly produced version of homey. Moosewood was designed, even after it was picked up by a mainstream publishing company, to look like a spiral bound, art-filled, hand-drawn book. 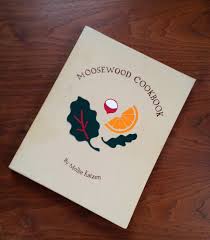 I started to read some of the history of Moosewood (and two other revolutionary cookbooks, The Tassajara Bread Book and Frances Moore Lappé’s Diet for a Small Planet) because I was really struck by the New Yorker writer’s dismissal of Moosewood (and lack of mention of other two). At one point, these 3 constituted something of a holy trinity in the college towns among which I moved.

More importantly, they revolutionized American cooking in a way that the cookbooks that followed them didn’t. And that’s what I want to talk about in the New Yorker’s de facto history of the vegetable cookbook. Because she dates the revolution very differently: to Deborah Madison’s Greens restaurant (started, like Moosewood, before the cookbook) and the eponymous cookbook that followed.

I’m sure Greens is a great cookbook and the restaurant stellar. But revolutionary forerunner of the current vegetable vogue it is not. It takes the vegetable revolution exemplified by Moosewood and places it in a slick, expensive package for the successful and the upscale. (Greens was founded, and still is, in San Francisco.) Proof? When the founders of Moosewood looked back 10 years, it would have been difficult to find a progenitor saying that vegetables could be the centerpiece. When the founders of Greens did the same…they would have seen Moosewood, and also Tassajara, and the many restaurants in college towns that served that type of food. (And they definitely would have seen the latter, as its author, Edward Espe Brown, also helped found Greens.)