Readers, I just want to comment on how much I find the reaction to the school shooting at Marjory Stoneman Douglas invigorating and salutary. While shootings, school and other, are always horrific, I find the reaction to this one needed, because it points toward a new paradigm for response. Not just horror and sadness, but anger, of the “we’re not going to take this anymore” variety. 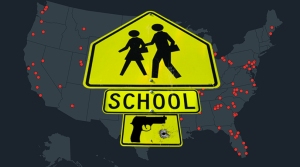 The students (and teachers) at Marjory Stoneman Douglas high school and elsewhere are absolutely right to be angry and marching. (And by the way, let us not forget the mass shooting in Las Vegas this summer; it isn’t only teachers and students who are in danger.)

What really captivates my meta-ist self here is that they are changing the narrative of how we react to shootings. There is a script and a template here that is always deployed: calls for understanding, weeping, wondering, secretly or not so secretly, how parents could not have known that something was wrong. Bury the dead, and provide counseling for the students. It’s basically a therapeutic response, grounded in mid-twentieth century psychology.

But it also, on some level, does nothing to delegitimize school shootings. Many teachers have been saying in the wake of calls to arm them that such a move implicitly accepts the fact that more violence is expected. Well, so does the mourning model. It isn’t that anyone thinks shooting is okay, of course. It’s that it’s become routinized.

They are very different struggles, of course, but the changing of the discourse is similar.

I hope the student march, planned for March 24 and at least initially envisioned at half-a-million folks strong according to the Washington Post, happens and knocks attendance records out of the park.

But I want to say on more thing, too. I have been very heartened by debate-team like behavior of some of the students I’ve seen interviewed, like these two on a recent PBS NewsHour. They are arguing for a ban on assault weapons (at a minimum), but take great care to also grant the legitimacy of gun ownership as part of American culture, and a Constitutional right.

In fact, they’re so careful and measured in doing this that if I’m not mistaken, I hear echoes of debate club advice, or their persuasive writing teacher. All that great advice, which I used to teach myself. If the other side has legitimate arguments, don’t deny them their legitimacy. Simply refute aspects of them, and advance the reasons you think your case is better.

And that is so much better than anti-gun fulminations that never grant the legitimacy of any opposing argument. As an example, we need look no further than the New Yorker’s Adam Gopnick. He writes an essay after nearly every shooting, which have become so gaseous that I skip them. (And, I should note, I am a great fan of Adam Gopnick’s essays in general.) From one after the Florida school shooting, about red state gun advocacy: “You should always try to meet the other side halfway, but you can only meet people halfway when you are both living on the same planet.” Adam Gopnick, Adam Gopnick, you need to re-enter debate club! Implying your opponent is from another planet is not reasoned discourse!

Nicholas Kristof of the New York Times, on the other hand, has it right.

He has been advocating for essentially working with the NRA rather than consigning them to another planet for some time. His articles cast gun control as a public health issue, and stress the need for regulation and training.

This is the way we need to go, while completely delegitimizing the idea that, well, school violence is just going to happen again.